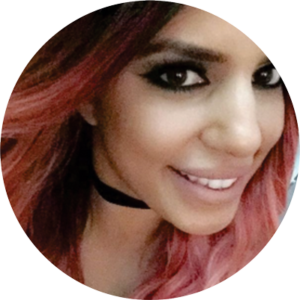 My passion has always been makeup, it’s something I’ve found inspiration in my entire life. As a makeup artist I strongly believe “Love of beauty is taste. The creation of beauty is art.” – Ralph Waldo Emerson.

Anyone can love beautiful things but to be able to create it is a form of art. I love the power of cosmetics and the power it gives me to transform. I approach cosmetics as I approach art, the entire body is a canvas and makeup is just one element of an entire image. I have a highly diverse background dealing with many different ethnicities, hair and skin. I take every day as an opportunity to learn something new. My drive and passion for makeup and fashion helps me stay informed about the latest trends.

My employment experience has pushed me to do what I love and what I have always dreamed of. I am finally fulfilling my dream with Belle Femme, having a company that is geared towards TV, film, editorial and bridal is what I’ve always wanted. We are lifelong learners and educators and now I have the honour of living out this dream with the dream team at Belle Femme. – Gurveen Gill

Shortly after receiving her Diploma from the Blanche Macdonald Institute in 2009, Gurveen delved into the retail sector and from there made the move into the film and television industry. While working on television and film sets she also spent time working on music videos, fashion shows, and photo shoots. Shortly after gaining experience on set she began working with renowned bridal hair and makeup specialist, Racquel Lacson from Studio 26, where she learned many tips and tricks of the trade. Most of Gurveen’s basic skills in bridal hair were learnt from Racquel, from there she practiced and continued to challenge herself.

Shortly after Studio 26, Gurveen made her way into MAC where she moved up into management very quickly. While at MAC, Gurveen received a job at Pink Orchid Studio, where she was a senior hair artist, taught new staff members hair styles and assisted the Pink Orchid makeup & hair classes. After resigning at Pink Orchid Studio, Gurveen immersed herself in fashion and makeup, attending NYC fashion week and working alongside major fashion houses, and attending Mario Dedivanovic’s makeup class in LA earning the title ‘Mario Dedivanovic Certified’. Gurveen also had the honour to meet and learn makeup and hair from Tamanna aka DressYourFace during her one on one class, earning yet another coveted certification, ‘DressYourFace certified’. Recently Gurveen has worked with high end Parisian designers and highly recognized model agencies such as Wilhemina, LA Models, and True Agency NYC, just to name a few. Gurveen is currently splitting her time between Vancouver, LA and NYC, pursuing her dream of editorial and fashion hair and makeup styling.